Whether it’s a pair of striped socks, a flashy Hawaiian shirt, or a fashionable plaid vest, sometimes even the smallest aspects of a cast member’s uniform at Walt Disney World can immerse you in a theme. On our latest episode, special guest Marshal Knight helps us count down our five favorite cast member costumes at the Walt Disney World Resort.

In the segment “Munchies and Merch,” we chat about the food and merchandise items we have our eyes on. Plus, we go head to head in another round of Disney debates, pitting water features, restaurant experiences, and bad attractions against each other. All that and more goes down on episode 126 of The Mad Chatters Podcast!

Special thanks to Marshal Knight for joining us this week. Go find Marshal online on Twitter (@Marshal_Knight) and Instagram (@marshalknight). To connect with us, find us on Facebook (/madchatterspodcast), Instagram (@madchatters), and Twitter (@MadChatters). Or, send your emails to comments@madchatters.net. Thanks for listening!

A deserted island, an overgrown water park, a former showcase of beloved attractions that’s now nothing more than an exhibit hall…

Walt Disney World is home to several buildings and areas that are mere shells of what they used to be. On episode 40, we do a deep dive into these all-but-abandoned parts of the parks, not to mourn what used to be, but to keep guests informed, to celebrate the past, and to talk about the potential future. Areas discussed include the Wonders of Life pavilion, ImageWorks, The Odyssey, and more.

In this week’s round of The Good, the Bad, and the Ugly, we critique the themed uniforms worn by various Cast Members throughout WDW. Plus, we sound off about our biggest pet peeves in 11-Second Rants. 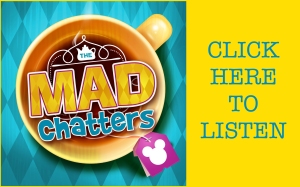