2019 marks the 60th anniversary of the very first roller coaster to open at a Disney park: the Matterhorn Bobsleds. Disneyland was open for four years before it got its first coaster, and when the mountain-themed attraction debuted, it was anything but your average, off-the-shelf ride. In fact, it was the first tubular steel coaster in the world! That attraction was the first in an iconic lineup of roller coasters that would eventually be introduced at the U.S. Disney parks, and on this week’s show we work our way chronologically through all 12 of them. Join us and special guest Courtney Guth as we discuss the impact and legacy of the Disney coasters and how we feel each one succeeds as a Disney attraction.

Also on episode 212, we review some of our recent meals at Ale & Compass, Liberty Tree Tavern, and Olivia’s Cafe. Plus, we have some fun with the hashtag #DisneyfyDisney by adding Intellectual Properties to original Walt Disney World attractions and restaurants. Come join the fun!

Be sure to find Courtney online and let her know you enjoyed hearing her on the show!

Podcast: Book of the Mouse Club

*We apologize for the audio issues you’ll hear throughout this episode. We were dealing with loud computer fans and a microphone that ended up not being plugged in, which we unfortunately realized too late. We hope you still enjoy the episode!

If you want to interact with us online, we’d love for you to connect with us on Facebook (/madchatterspodcast), Instagram (@madchatters), and Twitter (@MadChatters). Or, send your emails to comments@madchatters.net. Thanks for listening!

That’s the combination of sounds you’re likely to hear come out of my mouth while riding Space Mountain.

You see, this “journey through space and time” is often a bumpy, jolting, unpredictable one.

And I wouldn’t have it any other way. Why? Because when you’re at your happy place, your home away from home, you’re willing to put up with just about anything, even a bit of physical discomfort.

I realized this recently when having a Twitter conversation with a fellow Disney fan over on the west coast. He was raving about Disneyland’s Space Mountain, saying it’s much better than the original in Orlando. I confessed to him that I found Disneyland’s version to be, well… boring. It has no sudden drops or fast turns. Instead, it lifts you up a long hill then spends the rest of the time slowly guiding you back to the bottom. It’s essentially a long slide. Is it smooth? Absolutely! But to me, it’s missing a certain element of thrill.

I guess I was expecting what was promised by official Disneyland promo pictures like this one.

In response, the Disneylander said that Florida’s Space Mountain, to Disneyland regulars, is kind of like what the Matterhorn is to Disney World fans: rough and uncomfortable.

And then it clicked. He was absolutely right. The Matterhorn at Disneyland is perhaps the first and only Disney attraction I have opted not to re-ride simply because of the pain it inflicts. The seats are uncomfortable, the leg room is virtually non-existent, and the damage it did to my elbows and thighs was not something I wanted to experience again. But to a Disneyland regular, it’s the Matterhorn! It’s a classic! How can you not love it? 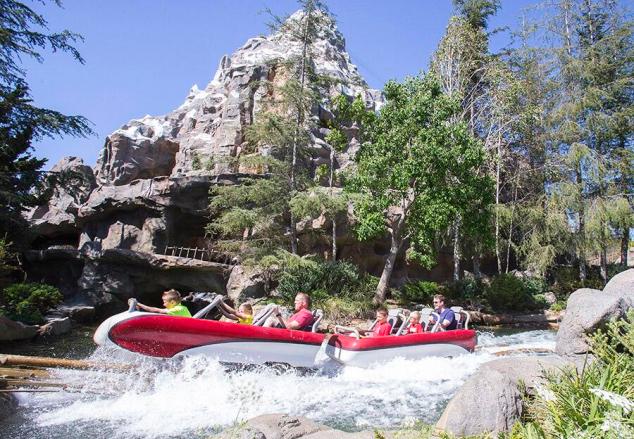 And that’s exactly how I feel about Space Mountain at Disney World.

Does Walt Disney World have its share of uncomfortable rides? Sure! I know people who can’t stand Space Mountain because of its roughness.

I, on the other hand, am in such a state of euphoria whenever I visit Disney World that I’m more than willing to be shaken and jarred a bit. I don’t bat an eye when Pirates or It’s A Small World gets backed up and a boat crashes into ours. I welcome the bumpy, off-road-like experience that is Dinosaur. When Primeval Whirl shakes me like Jell-O and leaves me not knowing which way is up, I just laugh. When Stitch jumps on my shoulders and releases a foul burp in my face…

Okay, I can’t put any sort of positive spin on that one.

Even The World Showcase Players, the former comedy troupe in the U.K. Pavilion, caused me immense discomfort when they volunteered me to be part of their performance, but hey, it made for great pictures and a fun memory.

Who knows, maybe in time I’ll even learn to love the Matterhorn as well. You’ll just have to force me on it first.