I like clean things. Tidiness, hygiene, the indoors, brand new shoes, fingerprintless iPhone screens—these are the small things in life I appreciate.

This September, when Jeremy and I visited the Walt Disney Family Museum in San Francisco, I was reminded of how much of a man after my own heart Walt Disney was. (I say “reminded” because, let’s face it, I go to a Disney park every year and co-host a Disney podcast. Obviously part of me already knew this to be true.) In the giant—not to mention glorious—room dedicated to Disneyland, I came across this plaque: 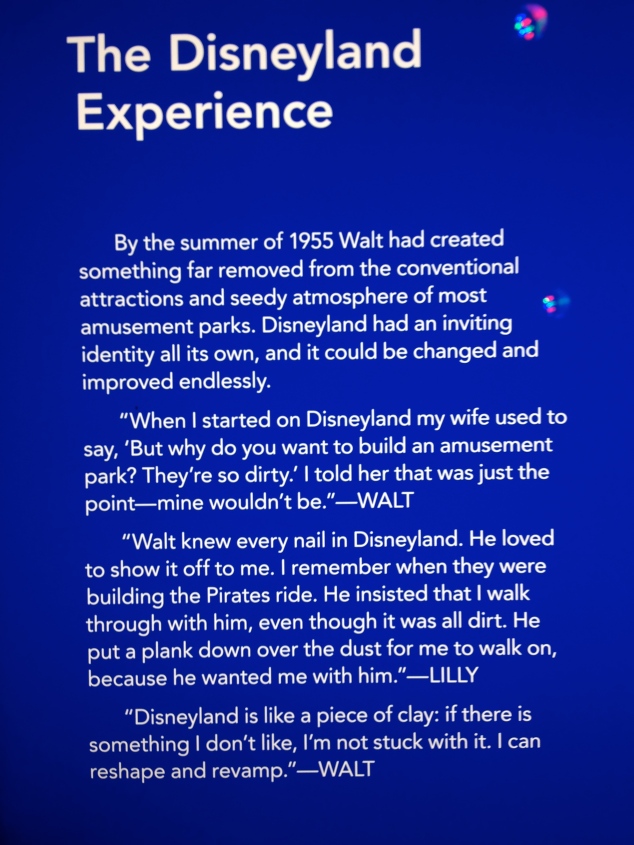 Now, it’s no secret that the Disney parks have set a standard in the theme park industry when it comes to cleanliness. When training their employees, many businesses actually point to Disney policies in order to illustrate the importance of appearing put together. Still, it was cool reading this quote and being reminded that providing a clean, welcoming environment has been part of Disney’s mission since the very beginning.

On my most recent trip to Disneyland, once we had nabbed a good viewing spot for the World of Color nighttime show, we joined the crowds around us who had taken a seat on the pavement. The woman beside me quipped, “If you’re going to sit on the ground, Disneyland’s probably the best place to do it.” My mindset was more, “It’s been a long day and I’m disgusting anyway,” but I couldn’t really disagree with her logic. Despite the sweaty tourists and the abundance of germs, Disney parks really do feel, well . . . clean. The paint on walls and railings always seems to have just been touched up. The pathways are always free of litter and scraps. Even the restaurants, which could be excused for having half-eaten French fries strewn among the recently vacated tables, seem like they just opened for the day. For a park as big and as well attended as Disney, that’s quite the feat.

There is more to Disney’s sparkling appearance than just a team of excellent janitors. First, the parks don’t sell gum. Anywhere. As a gum addict, normally I would be infuriated by this, but if it means being able to sit on a bench or walk on a sidewalk without the fear of sticking a body part in minty goo, I’m happy to throw a few packs in my backpack before the day begins and be on my way.

On top of that, all Cast Members are asked to pick up trash whenever they see it. No questions asked. No “That’s not my job”s allowed. Plus, Animal Kingdom, in an effort to stay true to its mission of caring for the environment, does not allow plastic straws or lids. Talk about dedication!

I’m not saying Disney World will ever completely satisfy my insanely high standards when it comes to cleanliness. It’s still a theme park, after all. Have I seen a stray paper cup sitting on a low wall? Sure. Do I apply hand sanitizer immediately after holding on to one of the metal poles aboard the monorail? Absolutely. Did I once lift my arms in the Typhoon Lagoon wave pool only to come up with a used Band-Aid clung to my finger? Sure did. But these instances were exceptions.

A few days ago, a blogger I follow on Twitter posted a photo from inside a building at Tokyo Disneyland. It showed an Asian family sitting on a bench, a neat pile of popcorn at their feet. The caption read, “Kid spills popcorn, mom puts it in a nice pile, mom tells a [Cast Member], and now they are awaiting a custodian.” Don’t get me wrong. I don’t think the American Disney parks will ever get to that point. Let’s be real: that’s just not who we are as a nation. But you better believe that when popcorn is spilled, someone—whether it’s a custodian, parade performer, or, who knows, even Mickey himself—will take care of it before you can blink an eye.

And that’s just one of the reasons I keep going back. To be able to experience the magic of Disney while at the same time resting assured you’re in a clean place is a wonderful thing.

Thank you, Walt, for knowing what’s up.

On a related note, I have to give a shout-out to the incredibly themed trash cans at Disney parks. They are everywhere, and they’re each themed to the land they’re in. I know they’re just trash cans, but they’re one of those details Disney just gets right. Keep an eye out for them next time you visit.